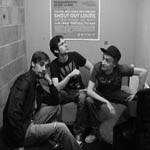 STRUBOSKOP is a group consisting of three DJs and producers,
born in Vorarlberg, who now live in Vienna and Innsbruck (Austria): Techtrix, Zorillah and Simeks.
Since 2006 they’ve been throwing parties in Austria and different locations in Vienna, Munich and Switzerland. They’ve supported acts like Kosheen (UK), Meat Katie (UK), Telepathé (US), Moonbootica (GER), Maral Salmassi (GER), Kurtis Blow (US), Sugarhill Gang (US) and others. Struboskop span a wide variety of styles – from Disco (with their notorious party Disco Heat!) to HipHop to House to Breaks and all the stuff that keeps people moving on the dancefloor.
2009 they released their first vinyl single „Lemon Juice“ and frequently do remixes for local and international acts. Recently they got signed by the UK/GER Label Envloop Records and will release their next EP feat. Violetta Parisini (Universal Rec.) in November 2010.
Our tracks got played by Round Table Knights (Made To Play, CH). Smalltown DJs (CAN), Social Disco Club (PRT), Top Billin (FIN), Functionist & Beware (UNLTD, AUT) and others.