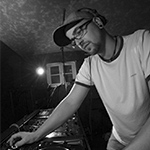 Dj and producer from Bremen, Germany

Born in 1985 in Bremen Dj Diffr3nt(Dennis Uygun)began his career with the age of 12 approaching Jungle/Oldskool & Happy Hardcore.The fast impellent articulated beats and heavy bass fascinated Dj Diffr3nt and awakened his passion for electric music. 2 years passed, during which intensive listening and dealing with the matter took turn, eventually resulting in a new pair of own turntables. For the next couple of years the young Dj spent long hours behind the players concentrating on developing his own style.
Finally, in 2001 Dj Diffr3nt celebrated his first booking which was followed by more and more for the next couple of years in and around Bremen. These bookings helped him to establish a name in the Drum ‘n’ Bass scene. Still, in 2007 the time had come for a change – The young Bremer Dj put up the mixseries “Electric Charge” (1-5),and showed a totally different side of his diverse taste in music.He thus set up a firm electro/house mixseries that persuades withfast, strong beats and powerful rhythms. The very successful party line–up “Strawberry Club” that was created in cooperation with other Bremer Djs (e.g. Sebastian Dreh & Florian Stein) took place regularly in Bremen’s finest clubs.