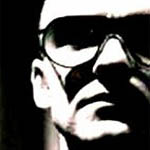 Having gone though a number of line-up changes, Frozen Smoke is now stripped back once more to the bare essentials – Dan, computers, synths and his love for all things electronic, electro and eclectic.
Besides recent remixes for artists such as Hillberg, Der Cube, Mightiness, Kooky and I-Cue, over the years Dan has also remixed and remodelled works for Ladytron, Zion Train, Chumbawamba, Mulu and The Mighty Quark.
Amongst his other achievements : extensive tours throughout Europe, playing at Glastonbury on the legendary Glade Stage, counted the world famous DJ John Peel as a fan, performed music to cows in the Austrian hills, appeared naked on stage at an MTV awards show and shocked a plethora of European dub fans expecting something completely different…
After spending most of his life in and around Liverpool, UK; Frozen Smoke has now relocated to the lovely city of Linz, Austria – where he continues to develop his own particular blend of electro infused explorations in sound. He has also joined forces with Hillberg and Ozed in setting up Brathering Shandy Records, a electronic music label.
Find him on Facebook here: http://www.facebook.com/thefrozensmokepage
Find him on Soundcloud here: https://soundcloud.com/frozensmoke