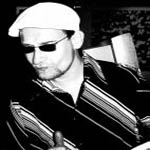 Born in August 1964 in Vienna, Austria, I live and work in Linz, Austria. Deejaying since 1986, producing tunes since the “early days” in 1982, inspired to do electronics after having been involved in a project of Mr. Conrad Schnitzler, famous ex-member of groups as Tangerine Dream.
More “dancy” stuff came up since the 1990ties, namely on my vinyl-label “D.N.A.Records”, featuring artists as DJ I-Cue and DJ Odyssey (NYC, Zulu Nation), Andrew Edge (Thompson Twins, Savage Progress), Parov Stelar (Etage Noir, Austria) or DJ Odd (backlab, Austria).
Aside from my long DJ-career, which brought me to perform on various festivals and clubs as DK Outlaw Festival NYC, Rave On Snow, The Masque/Liverpool, Superfunk (NYC) – just to name a few of them – also in the late 1990ties/early 2000s I published two music-mags Partysan Austria and Partysan UK.
If you are about to make yourself a picture about my vast and versatile activities through the recent “electronic-music-ages”, our legendary “NEXUS”-event-series in the 1990ties, e.g. bringing Mr. Jeff Mills first time to Austria (whose tune D.N.A. was dedicated to our nice and decent event), represent a milestone, same as my activities as a cultural manager – check out my links for more.

It´s hard to put 45 life-years (25 of them dedicated to electronic music) into only 20 lines of text, but to switch back into the present my latest release aside from envloop appeared on the highly appreciated Serbian label Bonbassrecords.